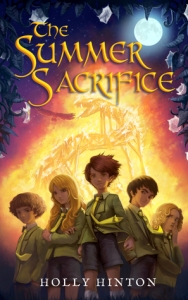 Three hundred years ago, the Great Goddess sent a storm to destroy mankind. She nearly succeeded. One Island survived.

These days, the Goddess stops the spread of evil by sacrificing the Island’s rotten teenage souls. Or so the story goes…

When Jamie Tuff survives her Taking, she thinks her worst nightmares are behind her. But then her soul starts wandering into other people’s bodies, and she discovers that the Island harbours a deadly secret.

Now, she must save her little world from a fate worse than— well, worse than what the Goddess has already done to it.

Join Jamie Tuff and friends on their adventures through land, sea, and sky, in a world where stars walk and Halfhawks fly.

Find out more about the author at her website: http://www.hollyhinton.com

The story follows Jamie Tuff as she discovers the truth behind the happenings at the island as well as discovers the truth of her powers. Jamie and her friends set out to save the souls that have been taken. The story is well written and has a simple plot that will keep the reader entertained. The book is more for children in the teens and such and it will appeal to their idea of fantasy and magic.

The characters are easy to relate with and well thought out. Each character has some role to play in this story and the plot is nicely brought together at the end. All the twists and turns in the story are tied up with a sensible explanation at the end. The story is one of self-discovery as well as the strength of friendship and trust. There are some interesting lessons that a teenager or child can learn form this story and the author has brought them out really well. The author has also briefly touched upon the existence of superstitions and the kind of effect they can have on people.

Overall this is a wonderful story to read for all children out there who enjoy fantasy fiction and any story with magic in it.