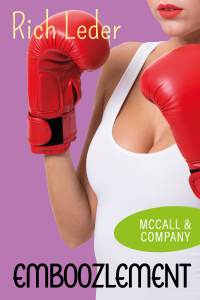 MCCALL & COMPANY ON THE CASE

PI Kate McCall was warned to stay home, stay put, and stay out of NYPD business. But someone is killing Lowry Lowe lawyers, and Kate is sure her father’s murderer is pulling the trigger. At the same time, former Major League relief pitcher Steve “Blue” Stark wants her to catch the crook embezzling big bucks from his West Side sports bar.

Kate can’t help but get in the game.

The problem is the killer is cluing her in before murdering each lawyer and she’s falling for Blue as fast as he’s becoming her prime suspect.

Can Kate and her crackpot crew catch her father’s killer before all the lawyers are dead? And will she find real love with dreamboat Blue? Or will she have to lock him up for stealing his own money?

If she comes through the kidnappings, she might beat the odds.

Rich Leder has been a working writer for more than two decades. His screen credits include 18 produced television films for CBS, Lifetime, and Hallmark, feature films for Paramount Pictures, Tri-Star Pictures, and Left Bank Films, and four novels for Laugh Riot Press.

He has been the lead singer in a Detroit rock band, a restaurateur, a Little League coach, an indie film director, a literacy tutor, a magazine editor, a screenwriting coach, a PTA board member, a commercial real estate agent, and a visiting artist for the University of North Carolina Wilmington Film Studies Department, among other things, all of which, it turns out, was grist for the mill.  He resides on the North Carolina coast with his awesome wife, Lulu, and is sustained by the visits home of their three children.