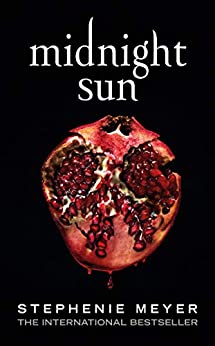 It’s here! Number one bestselling author Stephenie Meyer makes a triumphant return to the world of Twilight with this highly-anticipated companion; the iconic love story of Bella and Edward told from the vampire’s point of view.

When Edward Cullen and Bella Swan met in Twilight, an iconic love story was born. But until now, fans have heard only Bella’s side of the story. At last, readers can experience Edward’s version in the long-awaited companion novel, Midnight Sun.

This unforgettable tale as told through Edward’s eyes takes on a new and decidedly dark twist. Meeting Bella is both the most unnerving and intriguing event he has experienced in all his years as a vampire. As we learn more fascinating details about Edward’s past and the complexity of his inner thoughts, we understand why this is the defining struggle of his life. How can he justify following his heart if it means leading Bella into danger?

In Midnight Sun, Stephenie Meyer transports us back to a world that has captivated millions of readers and brings us an epic novel about the profound pleasures and devastating consequences of immortal love.

The much awaited Midnight Sun is here! Being a fan of the Twilight book series, I was quite interested in reading this book. The chance to get a glimpse into Edward’s complex mind and learn about his background and life was too good to pass up.

The book was a pleasant surprise. It sticks to the same story line as Twilight, but we get a complete view of the events that happened prior to Bella arriving in Forks, as well as those that happened after. Edward’s story and his thoughts are intriguing, considering that he thinks of so many things at a time. However, at times, his thoughts get repetitive and this gets a little bit annoying. A lot of the story is written in the style of an internal monologue with dialogue’s thrown in where necessary.

Even though we know the story, the different view point adds a lot of value to the original one, giving us insights into what happened in the background and how the characters ended up where they are. We come to know how the Cullen family found each other and their ideas, emotions, thoughts from Edward’s point of view, as he effortlessly uses his gift. As always, Stephanie Meyer brings to us a well-written novel and takes us back to interact with our favorite characters.

Overall, this story is a good read for fans of the series. Those who have not read the series, you can read this as a standalone, but it would be better to read Twilight first.