Releasing on 25th October
About the Book: 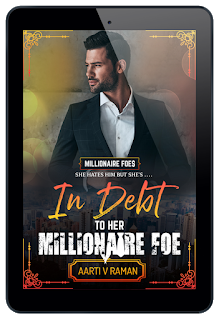 When the songbird owes the business tycoon…

Former gangster, Devansh Thackeray has finally managed to carve the life he’s always aspired to.
Building a chain of seven-star hotels all over the world, a reputation for being an honest businessman…and all the women he could ask for.
Ansh’s life is perfect. Or so he thinks.
Because he is about to hit by a lightning bolt from the past that’ll make him question everything he’s worked so hard for.
And her name is Kahini Palekar.
Kahini’s life is a nightmare.
She works three jobs to pay off the loan sharks circling her.
But, Kahini doesn’t mind because she also gets to do the only thing she’s always wanted to do.
Sing.
Even if it is at a shady nightclub in the backstreets of Goa, the beach paradise of India.
Kahini’s day of reckoning arrives when Ansh arrives back in her life, right when she’s almost assaulted by the manager of the nightclub.
Ansh offers both salvation from her debt and a chance to sing at the most exclusive wedding of the decade.
But there’s just one catch.
Kahini hates Ansh’s living guts and blames him for the destruction of her life.
Even though he was the boy she once recklessly gave her heart to.
Can Ansh get to the bottom of the problems plaguing Kahini or will this songbird fly away again after repaying her debt to him?
Meet the Millionaire Foes – rising from ruin through ruthless ambition, these self-made tycoons have everything. Except, the heart of the one woman who means everything.

The Millionaire Foe Quartet series contains four steamy romances set around the world, each of which can be read as a standalone.

Ansh entered the bar when the lights had dimmed, already in a foul mood from the altercation he’d had outside Grungy’s.
The term “bar” was a loose translation for what the seedy confines really were. It was set in a shady part of Calangute Beach, where the locals lived. It was not the area the posh, firang tourists frequented. The air here smelled of brine and fish and cheap liquor.
The smell of the ocean was everywhere.
It was, after all, Goa the beach paradise of India.
And to everyone who came here, it promised nothing but a good time.
The patrons of Grungy’s, the small-time bar that operated till four in the morning during season, had that look about them. They were local men, embittered and looking for cheap thrills. And some willing victim to provide that for them.
Ansh knew the type. They resented the tourists for showing up and flinging their foreign currency around and expecting their silly demands of room temperature water and late-night cruises to be catered to.
And they really resented needing the silly tourists and their foreign currency too.
A classic catch-22.
But, tonight, these patrons, and that was a loose term too for what the customers of Grungy’s were, were not looking for foreign currency or cheap thrills.
They were all gathered on the rickety tables that the bar owner had graciously provided and murmuring amongst themselves while the poorly-named stage was being set up.
She was the main act tonight.
Ansh frowned and sank deeper into his chair while the bar-back set him up with a glass of the local feni – a local toddy made from fermented coconut water and rum. He frowned deeper when he saw the lipstick mark around the edge of the shot glass and gingerly cleaned the lip with his monogrammed handkerchief.
Places like these reminded Devansh Thackeray of his squalid past.
He couldn’t stand them anymore.
Then, the spotlight hit the stage. The band struck a chord and a woman in black walked up to the mike.
Ansh sat up straighter.
Was she going to start stripping or something? He hadn’t heard the best things about these places on the wharf and this one didn’t have a stellar reputation either.
And, what the hell was she doing here anyway?
He’d sent her plenty of funds seven years ago, deposited in the account her brother had set up for both of them when he had turned eighteen.
Kahini had enough money to keep her in style, because he’d instructed the company’s bankers to always replenish the funds in that account should the need ever arise. The need had never risen, to the best of his knowledge. Even though he knew the money would never bring back her dead brother.
So, was she doing this for kicks?
Some poor little rich kid slumming it thing that all the society madams were doing these days?
He honestly had no idea. And that ate at his insides, like the strength of the feni he’d gingerly taken a sip out of.
Ansh had come here to find out what the hell she’d been up to the last seven years. Since the last time he’d seen her and she’d flung bitter, accusing words at him.

Hi, I’m Aarti V Raman aka Writer Gal. I have been a former journalist, editor, and even a sometime-teacher before I plunged into my dream job. That of being a full-time writer.
In fact, my three favorite words are ‘happily ever after.’
This comes in handy as I primarily write bestselling contemporary romantic women’s fiction, which is all about living happily, after going through some hard times.
My more notable works include the Geeks of Caltech and Royals of Stellangård series, Something Old, Something New, More Than You Want, and The Perfect Fake among others. My chicklit family drama, The Worst Daughter Ever, has been picked up for screen adaptation.
I always love to hang with you, my dear reader friend. I’ve created Writer Gal’s Reader Pals on Facebook for this reason and I hope to see you there.
If not, I’m there on all social media as @aartivraman but I’m most active on Instagram.
Aarti on the Web:
Newsletter * Facebook * Instagram * Twitter * Facebook Group