I was approved a copy of the book on NetGalley. The below review is my honest opinion. 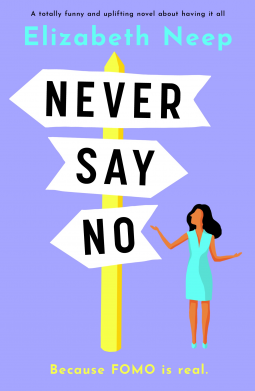 Hailey has always been told she can have it all. And saying yes to every opportunity that comes her way seems like the obvious way to make sure she gets it.

When she finds an engagement ring hidden in her boyfriend Dom’s closet, she knows she’ll say yes.

Her best friend Sophie suggests they run a marathon together and although Hailey hasn’t done more than sprint for a bus in years, she says yes.

And every time her new boss, the infamous Vivian Jones, asks her to stay late (again) at her dream job, the answer is always yes.

But somewhere between saying ‘yes’ to Vivian’s latest demands and still trying to make it home on time for boxsets and burritos on the sofa with Dom, Hailey has lost sight of what she really wanted in the first place.

Far from winning at life, Hailey feels like she is fighting to juggle two very different worlds. When those worlds finally collide, could having it all actually mean losing everything?

Fans of Mhairi McFarlane, Holly Bourne and The Devil Wears Prada will adore this funny, heart-felt and honest look at navigating those moments in life where you reach a crossroads and have to decide who and what it is you want to be.

Never Say No follows Hailey as she navigates life with the Fear Of Missing Out attitude. She always says yes to everyone and everything, but it feels as though this happens by choice and not out of necessity. Hailey has a steady boyfriend and a bestfriend who is close to both of them, making their group of three and the dynamics quite interesting. Having decided to pursue a career in Law, Hailey tries to get noticed at the prestigious firm, especially by their only female partner, Vivian.

Vivian is an icon, a strong woman who works hard to get what she wants. However, no-one really knows what goes on behind closed doors. As the story progresses, we observe these two women as they navigate their lives and the world. It took me some time to get into the book, as initially I could not understand where it was going. The blurb promises humor, but for me there was very little of it and more personal drama. In addition some of the characters like Liam and Dom were not very well developed. It would have been nice to get to know Hailey and Dom as a couple and to understand their dynamics before the job at the Law firm gets in the way.

The story flows well and even though the book did not grip me, I did enjoy the read. The author does show us a reality that most people can relate to, the idea that we do not know where we are headed, or that we have to be a certain way to be accepted. All these are very pertinent points and the author tackles them well through this story.

This book is worth a read and I would not hesitate to recommend it.