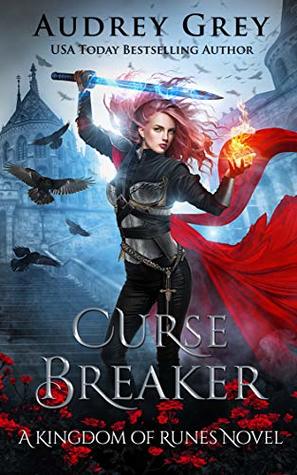 Perfect for fans of Sarah J. Maas and Holly Black, this enemies-to-lovers adventure romance should come with a book hangover warning.

All magic has a price.

Haven survived the Devourers, but she isn’t any closer to breaking the curse. Meanwhile, her forbidden magic rages brighter and more dangerous every day.

To control her powers and stand a chance against the Shade Queen, Haven made a bargain with two enemy immortals. Now her waking hours are spent fighting alongside the Sun Lord, but her dreams belong to the Shade Lord.

Only the closer she ventures into the wicked Shadow Kingdom the more her magic shows itself—and the more she struggles with whom to trust. The golden but wounded Sun Lord or the darkly charismatic Shade Lord.

And both have the ability to save her . . . or destroy her.

With the Shade Queen closing in and Bell’s time nearly up, Haven will sacrifice everything to break the curse—but will it be enough to stop the mortal realm from falling into darkness forever?

**Curse Breaker was previously published in the boxed set Shattered Worlds. This is a revised second edition. The Kingdom of Runes series is upper/mature YA and contains mild cursing and adult situations, including romance.**

This is the second book in the Kingdom of Runes series by Audrey Grey. Teeming with both dark and light magic, Haven is struggling to find a way to control her magic, learn to use it and at the same time break the curse to get back her best friend, Prince Bell. In addition to this, she makes deals that she is not sure she can keep up, considering that they are with two enemy immortals.

In this book, Haven is drawn into a love triangle between the Sun Lord and the Shade Lord. She knows that both of them have feelings for her and she is conflicted in her emotions towards each of them. I love how charismatic each character comes off as and it is quite entertaining to read about these budding romances. However, there are some things that irked me during these sections, especially how Archeron’s feelings suddenly changed and then the whole group dynamics.

On the other side, we see some of Prince Bell and what he is going through. A wonderful human being, he brings out different sides of people including the creature who saves him from being ripped apart. This is an interesting dynamic to say the least. A lot of the characters are shrouded in darkness and have a ton of secrets which take a lot of time to actually be revealed.

The pace of this book picked up and was quite gripping. It was better than the first and focused more on the adventure and action. I enjoyed this second book in the series and am looking forward to reading the next one.

One thought on “Book Review: Curse Breaker (Kingdom of Runes #2) by Audrey Grey”