A blast from the past, nostalgia hit me as I picked up this book once again to re-visit the sights and smells (trust me some are rather nasty, especially in Goblintown) of Muddle Earth. 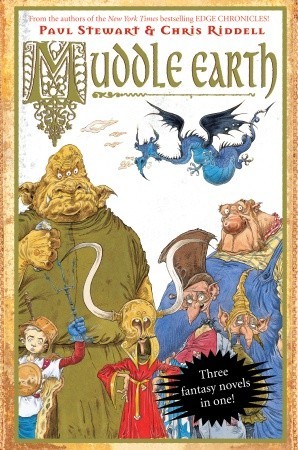 Joe Jefferson is an ordinary schoolboy from ordinary Earth. At least, he was. But something strange happened when he was walking his dog, and now he’s Joe the Barbarian—fearless warrior-hero, summoned by Muddle Earth’s leading wizard* to slay ogres, wrestle dragons, and bravely confront villains.

Joe doesn’t feel much like a warrior-hero.** But evil is stirring in the heart of Elfwood, and the people of Muddle Earth need help (although most of them don’t know it yet). Perhaps Joe Jefferson really is a hero after all. . . .

* Actually, Muddle Earth’s only wizard. And he’s not very good.
** He doesn’t really look much like one either.

This post has been sitting in my drafts for a very long time, but even more so, this book has remained close to my heart for much longer! This is a book that was a part of my childhood and honestly is one of the few books that made me laugh as much as I did.

This is a story of a young boy Joe who ends up in a situation he never expected to be in. All of a sudden, he is in Muddle Earth, portrayed as the fearless warrior-hero who has come to save them from evil. This is a hilarious adventurous story that follows Joe as he figures out how to survive and finds that everything he does is somehow accepted by the people of Muddle Earth.

Readers are in for a treat as we encounter ogres, dragons, a wizard (who is not very good), and a kid who is quite smart and also rather lost. The story is hilarious and will have the readers in splits. There are pictures to accompany the text which are brilliant and add an even more eccentric spin! I love how the characters are portrayed through the pictures.

This is very much a treat and should be read by all children. Even adults are in for a hilarious adventure!