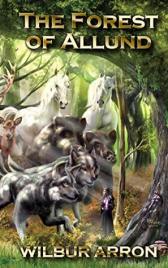 Young Mage Alexio Sopholus has returned home after ten years away at the Mage Academy. Although short and slight of build due to childhood sickness, he has found academic acclaim through his studies. Upon arrival in his home of Korpolis, he reacquaints himself with his old human friends and his former home. His only desire is to take up the position of forest caretaker left to him by his deceased master. The Forest of Allund is a place filled with equal parts myth, mystery, and fear. There he meets a wandering Amazon, but most importantly, his large and intelligent animal friends reside there. They all help him guard the forest against outside intruders. Soon the nature of the forces that govern and protect this place is made evident to him as he finds new sources of knowledge and power.

Although he only seeks peace and quiet, he is soon thrust into a war with a new barbarian tribe, the Zilar. They seek total domination of all the lands and are not above using slavery, genocide, and brutal repression to get their way. Alexio is forced to fight them directly using all the powers at his command. Initially successful in his efforts he finds his victories have only made him the object of intrigue by his leaders who fear his power and his popularity. His efforts at protecting the land are met with suspicion, fear, and betrayal by his own leaders.

Seeing the destruction, deceit, and betrayal around him, Alexio is forced to conclude that all his most cherished beliefs, principles, ethics, and morality are all but useless against the foes arrayed against him. To protect himself and his friends he must wage war. It will be a war without pity, mercy, and against the laws of Gods and Men. It may also make him an outcast in his own land.

I was provided with a complimentary copy of the book by the author in exchange for an honest review.

This is the first book in the series and follows the journey of a young mage named Alexio Sopholus. Alexio has spent ten years at the Mage Academy and has now returned to his previous home. As the story unfolds, we meet various characters both from his past and those who belong to his life as a mage.

The story follows Alexio as he faces many different enemies and formulates different battle strategies. Sometimes he fights alone, sometimes he has help. I found the use of Greek words at times to be quite confusing as the meaning or references were provided only at the end. I enjoyed the way the author interspersed Greek Mythology and used it as a backbone for the plot. However, a caution to readers, be sure to have some background knowledge of Greek Mythology otherwise it can be difficult to understand the book.

The writing is average with a lot of unnecessary description that didn’t catch my attention as much as I had hoped. However, I did enjoy reading about Alexio’s plans and strategies. I also enjoyed meeting his “friends” in the forest though their names were a little hard to remember. The dialogue between him and his “friends” and the ways in which they helped him out were interesting and very well portrayed during the course of the book. I also liked the fact that Alexio lived by a very specific code and he tried to follow it as much as he could. This was a good addition to the character development of the MC.

On the whole, the book was a good one time read and there were quite a few sections that I enjoyed! I think this book and the author have much more potential. I will definitely look out for more books by the author.