It is with great pleasure and pride that I write this post today.

I would like to introduce you all to The Legacy of the Heirs, Book 1 in a series written by my good friend A. V. V. Reddi. This is his first published work.

Read on to know more about the book and my thoughts about it. 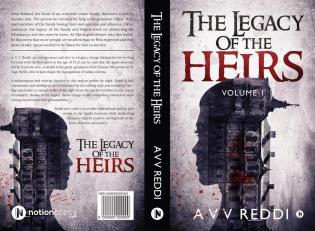 John Rolland, the head of an erstwhile crime family, discovers a plot to murder him. The person he turns to for help is his grandson Viktor. With each member of the family having their own agendas and alliances, Viktor embraces the legacy of his family and begins work on protecting his inheritance and the ones he loves. As Viktor goes deeper into this world, he discovers that more people are involved than he first expected and that more drastic steps needed to be taken for him to survive.

The book can be found here: Notion Press, Amazon, Flipkart

A. V. V. Reddi, an entrepreneur and heir to a legacy, brings his passion for writing forward with his first novel at the age of 27. It can be said that the apple does not fall far from the tree, as Reddi is the great-grandson of the famous film producer B. Nagi Reddi, who helped shape the foundations of Indian cinema.

A businessman and startup founder by day and an author by night, Reddi is fun, charismatic and intelligent, as is evidenced by his writing style and narrative. Having experience in various walks of life right from the world of politics to the world of industry, thanks to his legacy, Reddi brings to life compelling characters with strong motives and bold personalities.

Reddi now runs a successful educational startup and works in his family business while dedicating his spare time to creative writing both in the form of fiction and poetry.

Note: This is my honest and unbiased opinion of the book.

The Legacy of the Heirs is built up on a strong plot filled with intrigue, mystery and a whole lot of family drama. At first it might seem as though the story is confusing, but upon persisting, the reader is in for a treat.

On the surface, the family seems to work fine together, but if you go and peak beneath, there are so many shades to each character. Everyone has secrets to hide and their own confidantes within the family circle. The story focuses mainly on Viktor, the grandson of John Rolland, and his aim to protect his family no matter the cost. We are introduced to his close knit circle of friends who are ready to do anything for him.

These characters are brought in one by one and are well thought out. We are given glimpses into who they are and how they fit into Viktor’s life. Apart from the friends, comes the entire Rolland family: the children, their spouses and the grand children. The reader is dropped right in the middle of a murder plot and then something along the lines of revenge.

Reddi weaves an intricate web of love, lies and deceit to ensure that the reader remains hooked. He has also managed to handle a large number of characters with ease. As a reader, we can understand each person’s significance and their role in this elaborate plot. The story is well written and seamlessly flows from one situation to the next.

By the end of the book, the reader is left yearning for more!