I was provided with a complimentary copy of the book in exchange for an honest review. 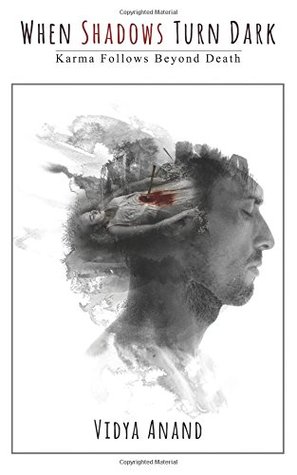 Anirudh is clouded with the mysteries of a past life, which he relives through his nightmares. Though his logical mind denies it, he sets out to unravel the secrets about the girl in his dreams, Chitrangada, and her brutal death.

His friends, Madhav and Trisha, support him through his inner battle.

In another part of the world, Sanjana and Abhimanyu are happy in their lives, quite unaware that they are also destined to become a part of this cryptic game.

Will Anirudh be able to save himself from slipping completely into the past?

When Shadows Turn Dark is a tale about friendship, love, betrayal and revenge that interweaves the lives of these people.

A tale about the mystical world of rebirth, and much more!

I did not enjoy this book much and I had to concentrate hard to get through it. The main plot seems to have come right out of a Bollywood script, with so many similarities that it is not so easy to distinguish which is original and which is not.

Anirudh, the protagonist, has had dreams about the death of a girl named Chitra, his entire life and he doesn’t know why. He doesn’t even know who she is. Sanjana, the descendant of princess Chitrangada, who lived almost 100 years ago, suddenly experiences changes in moods and we have no idea why. Set in a time when everyone has secrets and won’t talk openly, the concept of rebirth is frowned upon. The story draws upon the past to define the present and the decisions of the various characters take the story forward.

The characters are not very interesting or well developed. The reader is not given much to go on and it is quite difficult to relate to the characters. The women are created under the usual stereotypes of gossip, giggles and being bothered about guys more than their work or career. The men are shallow and there is no depth in the character personalities.

The story runs in two parallels, present day, and a story-line from almost 100 years ago, about which the protagonist has been having dreams his entire life. It doesn’t seem as though a lot of research has gone into the career choice of the characters and it’s ironic how they all end up in the same palace that the past refers to. Even though his friend Madhav has been shown as supportive, the characters never really express themselves and the reader doesn’t know what they are really thinking or how they fit into this story.

There is a lot of repetition of points and this acts as a deterrent while reading, making it difficult to concentrate. Also, while bringing together the past and present, and introducing the concept of rebirth, there is no clarity in the plot. When all the characters meet (this is extremely brief), there is no explanation or connection to what they have experienced. It’s just a short connection and then all of a sudden they all go their own ways. This makes the story uninteresting as it ends up flowing without coherence of thought. The story could have been brought out better with a little more explanation and stronger background information.

On the whole, however, the story is simply written and if you’re looking for a quick read that doesn’t need much thought, this is worth a shot.