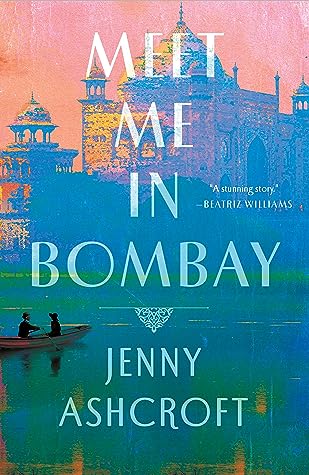 United by love. Separated by war. Will they find their way back to each other? Find out in Jenny Ashcroft’s historical romance Meet Me in Bombay…

It’s New Year’s Eve in Bombay, 1913, and Madeline Bright, new to the sweltering heat of colonial India, is yearning for all she has left behind in England. Then, at the stroke of midnight, Maddy meets Luke Devereaux, and as the year changes so do both their lives.

Bold and charismatic, Luke opens her eyes to the wonders of Bombay, while Maddy’s beauty and vivacity captures his heart. Only her mother disapproves, preferring the devoted Guy Bowen as a match for her daughter.

But while Maddy and Luke are falling in love, the world is falling apart. World War I is on the horizon, and Luke will be given no choice but to fight. They will be continents apart, separated by danger and devastating loss, but bound by Luke’s promise that they will meet again in Bombay. His only wish is to return to her–but first he must remember who she is . . .

Meet Me in Bombay is a beautifully written story of love and loss in the time of WWI. Mostly set in Bombay, we are introduced to Maddy as she comes to visit her parents in Bombay after many years in England. We follow her as she discovers the sights and explores the city. The author has done a wonderful job in bringing the city to life and in describing it, making the reader yearn to visit.

This is a story poignant tale love so strong, it spans distance and time and still holds strong. The author describes the joys of falling in love, precious time spent and the heart break of the war and loss. The characters are well crafted and bring this story and the places to life. The war is described in detail and will bring tears to the eyes of the reader. Mixed with fiction and facts, this story is deeply emotional and will pull the reader in from the beginning. The friendships and relationships between the characters whether with friends, parents, partners is amazing and well portrayed. Even with secrets and scandal, nothing comes above love.

I thoroughly enjoyed this emotional rollercoaster and I highly recommend this book to everyone!