This post is regarding the release of the book titled: “A Book About A Film”.

C. W. Schultz is an American author who was born in Seattle, WA on January 24, 1985. On July 5, 2007, Schultz’s debut novel “YEVAL” was released, a story which came to be through a script Schultz had written for a film. Schultz, being a major animal lover, started 2008 with a short-lived blog about bird care for the fallen Seattle Post-Intelligencer called “BIRDIE BASICS”, but soon resigned due to finding it unnecessarily repetitive, explaining that, “You can’t eternally expand something written in the manner of a textbook. I said what needed to be said for basic information about bird care for beginners. It’s time to move on. The blog is complete. The mission is accomplished.” Throughout much of 2008, Schultz got a gig writing trivia questions for game-show “EASTERN EXPEDITION” before the show was eventually cancelled. In 2010, Schultz released his second novel “THE PACK” and wrote the film “WATCH” which premiered at the Gig Harbor Film Festival in 2012 and was well-received, being listed as the Director’s Choice Awards’ First Runner-Up for Best Short Film. Schultz’s third novel “JILL” was released on December 7, 2012; and his fourth novel “A BOOK ABOUT A FILM” on September 8, 2015.

The above link is to the ebook. The paperback is also available.

The book is also available for reference on goodreads, shelfari, BookJetty and LibraryThing.

Some great news is that a part of the review posted on redpillows has been included in the book. 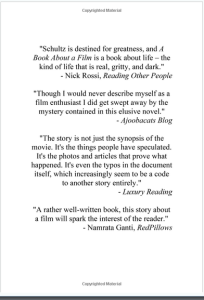 This is a great honor for us at redpillows and I hope that authors and readers alike enjoy our posts and the content on this blog.