The Good Dictator I – The Rise of an Empire by Gonçalo JN Dias will be available for free download from amazon and smashwords on 12.04.2017 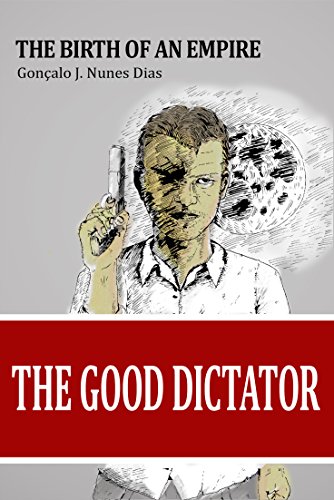 There’s an object parked on the moon, but curiously, the unfolding of the story does not take place in New York, but rather, in Lisbon suburbs and in a small village between Portugal and Spain.

The main character, Gustavo, does not get along well with his parents-in-law, and his wife does not like Gustavo’s friends.

A genre-busting book that includes adventure, thriller, dystopia or utopia and an exciting love story.

SKYBLIND by J.R. Fehr will be available for free on Amazon for kindle, from March 11th-15th 2017.

Grab a copy of the book here during that period.

Read on to know more about the book. Look out for my review of SKYBLIND in the upcoming weeks.

In a world with only two seasons – Day and Night – light is all that separates the living from the cursed. For when Night falls, the Locura plague the land…

Desperate to learn the truth of its origins and to break free of its curse, the twins leave home with childhood friend Tray’o and embark on a quest that leads them to come face to face with Syyris Sagrado, the god of Day, and discover a forbidden power greater than the forces of Day … and Night.

When J.R. Fehr popped out of the womb, he knew there was more to the world than the four boring hospital walls that he was seeing. “Zango!” his newborn mind exclaimed as he saw people appear and disappear through a mysterious portal in the wall. As a child he found life wowtazzling, but as he grew older the cold water of reality hit him, and the magic he once knew vanished. After spending some wet and shivering years lost in a joyless wasteland, he once again began to see magic in the world. He writes because the Wonder of true life is far grander than anything he ever thought possible.

I came across this book by chance. It is a short story and is not officially available on any site for download or purchase. The author has made it available to all those who sign-up for her reader’s list. I strongly urge you all to do the same since you’re in for a delightful read.

A delightful short story, the reader is in for a quick roller coaster ride. As recommended by the author, it would be better to read this story after reading Gingerbread Man the first book in A Nursery Rhyme Suspense series. However, I managed to gauge the concept and obtain a rough idea about the characters while reading this book. I truly enjoyed myself and the ease with which our characters brought down the bad guys. I strongly recommend everyone to take this chance to avail the free book and enjoy it as much as I did.

Maya Anderson has faced more than her share of tragedy and heartbreak. For the past six years she’s constantly been on the move with her mom. When another disaster strikes, she finds herself back in her childhood hometown of Beaumont, living with her older sister for her senior year.

A chance meeting reacquaints her with Ben McCaffey, a long-forgotten classmate from her past. After the murder of his girlfriend, Ben has become a social outcast. He’s despised by some and feared by most.

Determined to become Ben’s friend, Maya begins to break through his layers of emotional protection. It isn’t long before they realize that they both have secrets in their pasts. As the line between dealing with grief and struggling with a desire for revenge begins to fade, the secrets that draw them together may be what will ultimately tear them apart. Because the closer Maya gets to Ben, the more dangerous her situation becomes.

The Sea of Dreams spat me out with no memories, no idea of who I was or what my purpose might be. When Captain Bo, dream killer extraordinaire, arrived, I took a chance to explore. On the road of discovery, I tripped upon dreamplanes floating dead in a graveyard, scared children attempting to survive their dreams turned nightmare, strange guardians, rogue Dreamlanders, and ships with hearts of silver. I learned more about Dreamland than I ever thought possible. But people are dying. They’re disappearing. Dreamland is twisting, shifting, ripping. I don’t know how best to help, how to save those I’ve met, who have wormed their way into my heart. If only I knew who I was, what I’d been born to do. Then I found out. I know who I am. I wish I didn’t. Dream Killers is geared for fans of Once Upon a Time. The first season (Spring 2014) consists of 3 novellas called episodes. It follows River as he discovers who he is and his role in Dreamland. Dream Killers is to Dreamland Stories what Agents of Shield is to the Marvel movies. Dreamland is an intense, rich, fascinating world with lots going on. If you like fairy tales, are looking for something new,try this one.

SM “Frankie” Blooding lives in Colorado with her pet rock, Rockie, and Jack the Bird. Jack has refused to let her to take up the piano again, but is warming to the guitar. It might help that Frankie has learned more than two strings. She’s added a few more Arabic words to her vocabulary, but don’t invite her into conversation yet—unless, of course, you’re willing to have a very . . . slow . . . conversation. She’s dated vampires, werewolves, sorcerers, weapons smugglers and US Government assassins. Yes. She has stories. She’s also an investigator with a local paranormal investigation group, Colorado Paranormal Rescue!

The author is planning to give away 10,000 copies of The Exile. The codes to download the book for free from smashwords is provided below. There is also a code available to get a 33% discount on the second book in the series.

Stones of Power is a clean Fantasy Adventure series, that is geared to YA readers. It follows four boys as they make their journey into manhood in a world of magic. It’s a fantastic epic adventure and now through the month of June you can get it for free, and share it for free as a special gift to your blog followers.

Stones of Power: #1 The Exile

In a world where each person is born with a magic ability, the island of Denall is on the verge of an attack from a power hungry sorcerer, Mordyar, as he scours the world in search of the Stones of Power. While the stones are gathering and their power begins to be revealed, four boys leave their village on a rite of passage into adulthood and are swept into an adventure that will make men and heroes of them, if they can survive.

Free copies of Stones of Power Book 1 The Exile

Stones of Power: #2 The Invasion

While Kaz and P join forces to overthrow Omer, the holders of the Strength and Magic Stones unite to hunt down Mordyar’s minions and discover his plans. With each new discovery they are thrown farther into danger until they find themselves in hopeless peril. Will Prophecy overcome Mordyar’s forces as they invade a broken kingdom, or has Fate already turned on the stone holders? The time for hidden silence ends, as the time of strength and magic begins.

33% discount on Stones of Power Book 2 The Invasion

About the author:
Eric Buffington was born in Ontario Canada, where he lived until he was eighteen. After that he traveled with a Canadian government program, for one year (what he did is top secret), he then moved to California to serve a two year mission working with the Laotian people.Shortly after returning home he met the love of his life, moved to Pennsylvania and married her. He has since completed a Bachelor’s and Master’s degree in education. He currently lives in Pennsylvania with his wonderfully supportive wife, and their four children.  He currently works as a High School math teacher in an online cyber school. You can watch his math lessons on his Youtube channel.
Website: http://ericbuffington.weebly.com/