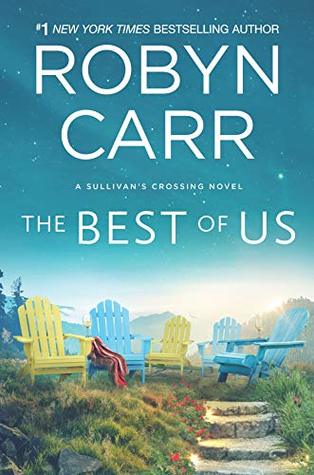 In Sullivan’s Crossing, #1 New York Times bestselling author Robyn Carr has created a place where good people, powerful emotions, great humor and a healthy dose of common sense are the key ingredients to a happy life. Sullivan’s Crossing brings out the best in people. It’s a place you’ll want to visit again and again.

Dr. Leigh Culver loves practicing medicine in Timberlake, Colorado. It is a much-needed change of pace from her stressful life in Chicago. The only drawback is she misses her aunt Helen, the woman who raised her. But it’s time that Leigh has her independence, and she hopes the beauty of the Colorado wilderness will entice her aunt to visit often.

Helen Culver is an independent woman who lovingly raised her sister’s orphaned child. Now, with Leigh grown, it’s time for her to live life for herself. The retired teacher has become a successful mystery writer who loves to travel and intends to never experience winter again.

When Helen visits Leigh, she is surprised to find her niece still needs her, especially when it comes to sorting out her love life. But the biggest surprise comes when Leigh takes Helen out to Sullivan’s Crossing and Helen finds herself falling for the place and one special person. Helen and Leigh will each have to decide if they can open themselves up to love neither expected to find and seize the opportunity to live their best lives.

The Best of Us introduces us to Leigh and Helen, two wonderful women who share a very special bond. Having brought Leigh up, Helen tries to find her space, once her niece is all grown up. As Leigh tries to break away from her stressful life and deal with moving away from her aunt, Helen, we see that the both of them have to accept the change. The story is well written and we watch as the main characters interact with their new surroundings and the new people around them. They have to adapt to each other as adults and accept who they are now! The author shows us the importance of acceptance and maintaining relationships, especially those with family.

Once again we are back at Sullivan’s Crossing for another feel-good tale of love, good people and a lot of fun. This book is a must read for fans of romance novels!

“In the summer of 1947, when the creation of the state of Pakistan was formally announced, ten million people—Muslims and Hindus and Sikhs—were in flight. By the time the monsoon broke, almost a million of them were dead, and all of northern India was in arms, in terror, or in hiding. The only remaining oases of peace were a scatter of little villages lost in the remote reaches of the frontier. One of these villages was Mano Majra.”

It is a place, Khushwant Singh goes on to tell us at the beginning of this classic novel, where Sikhs and Muslims have lived together in peace for hundreds of years. Then one day, at the end of the summer, the “ghost train” arrives, a silent, incredible funeral train loaded with the bodies of thousands of refugees, bringing the village its first taste of the horrors of the civil war. Train to Pakistan is the story of this isolated village that is plunged into the abyss of religious hate. It is also the story of a Sikh boy and a Muslim girl whose love endured and transcends the ravages of war.

The story has been narrated quite well and manages to capture the horror of the situation at the time of independence at the borders. The story is based in a small isolated village called Mano Majra where the most exciting thing to happen would be the stopping of a train. This would be watched by all the villagers. The village is also one where people from different religions live together and treat each other as equal.

Amidst all the peace, an unknown person steps into the village and slowly things start happening. First is the arrival of a ghost train in the middle of the night, following the arrival of a number of soldiers. This triggers various incidents leading to slow divisions between the people of the village due to religion.

The one aspect of the story which I felt was a bit out of place or rather did not seem to fit was the love story between a Sikh boy and a Muslim girl. There was no concrete development on this front and though I waited until the end to understand the point of this plot line, I could not find any. Also, there are a few times the story seems to move away from the main plot line and these side stories do not seem to fit with the entire idea. They just seem to be there without a reason.

In spite of the above, the story is well written and does get across to the reader the situation at the time as well as the hardships faced by people. It also shows us clearly, how the people were so easily divided when asked to choose and ultimately how religion started becoming a barrier between those whose families had lived together for generations.

I recommend this book to all as it outlines a part of the history of our country in an interesting way.

Buy link to Amazon.in (courtesy of the amazon associate program):