I would like to start off this post by first wishing you all a very happy and prosperous New Year 2023!

I would also like to thank the entire reading community, friends and everyone who has supported me and my blog. A big shoutout to the Instagram community of readers and bloggers. It is a wonderful place to talk about books and get to know fellow bibliophiles.

Here I’m including the images (from goodreads) of my top 6 favourite books read in 2022 in no particular order. For some of them, the review is posted already and for some the complete review will be put up soon (I am quite late on this and I have a huge backlog 😦 )

I have to say though that I enjoyed every one of the books I read in 2022 and some just stuck with me more than the others. It’s all a relative comparison for me. As you can see, the books range across many genres and I am so happy to have gotten the chance to discover so many new authors who have fast become favourites! 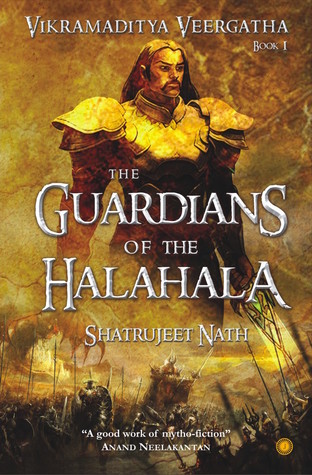 VENGEANCE IS A CAGE
FORGIVENESS IS FREEDOM
In their greed to possess the deadly Halahala, the devas and the asuras have employed every dirty trick against Vikramaditya and his Council of Nine. But the humans are still standing, bloodied but unbowed.
When the wily Shukracharya discovers the secret to breaking the Council’s strength and unity, he forges an unlikely alliance with his arch-enemy, Indra, to set a deceitful plan in motion.
As cracks emerge between the councilors and their king, ghosts from the past threaten to ruin Vikramaditya and Kalidasa’s friendship, signaling the beginning of an eclipse that will cast a long shadow over all that Vikramaditya holds dear. And into this shadow steps Indra, bearing an old grudge — and a devastating new weapon.
How much longer before the Guardians of the Halahala finally fall apart?
Other Books in the Series:

(Click on the Covers for more details)
About the Author:

Shatrujeet Nath is the creator of the runaway national bestseller series Vikramaditya Veergatha, a four-book mytho-fantasy arc which includes The Guardians of the Halahala, The Conspiracy at Meru and The Vengeance of Indra. Described as “a new face to Indian mythology” by DNA, Shatrujeet writes for movies and web shows as well. He is also the author of The Karachi Deception, an Indo-Pak spy thriller.
Facebook * Twitter * Goodreads