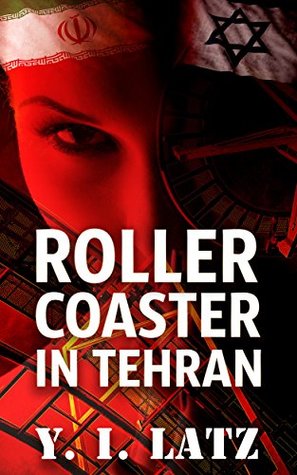 Imagine being sent to spy on your country’s worst enemy!

Dr. Amalia Tavori is a mother of three and an expert rollercoaster engineer with a short fuse and an insatiable appetite for adventure. She is forced to join the Israeli Mossad to save her husband from economic collapse. Amalia is sent under false identity to Tehran, the capital of Israel’s worst enemy, to help the Iranians build a grandiose amusement park.

Every day could be Amalia’s last!

Roller Coaster in Tehran reveals an intimate picture of the exceedingly dangerous daily life of an Israeli spy in Tehran. Amalia knows no boundaries and has no shame. She fools both her enemies and her operators from the Mossad, working out of her own deep inner convictions.

Can Amalia complete her mission without losing her life?

When a grave disaster befalls her family in Israel, it becomes even more difficult for her to perform her secret mission. This book redefines the concepts of loyalty, betrayal, enemies, and compassion. The image of an ordinary woman emerges – one who yearns for true love but who has been forced to become larger than life itself. She is prepared to sacrifice herself for her country, but not to sacrifice her life for an existence without love.

Meet Dr. Amalia Tavori an Israeli spy for the Mossad and an expert rollercoaster engineer. She is sent to Tehran on mission, under the ruse of helping the Iranians build a huge amusement park. Being a part of this world and the work, doesn’t deter Amalia from enjoying the thrill of it all. The exhileration she feels when she travels on missions seem to have made her crave danger more, taking her away from her family. A mother of three, Amalia finds that her relationship with her husband has sunk, mostly due to how he dealt with the loss of their money, forcing her to join the Mossad in the first place, to save him and their family. Having gotten accustomed to a certain lifestyle, it is rather difficult to perceive any other way of life.

While on mission in Tehran, Amalia is forced to reconnect with her old friend, to renew old ties as she continues to get closer to her friend in order to get to her husband. Through all this, we see the compassionate side of our protagonist as she struggles to deal with some of the facts presented to her, which seem to contradict the nature of the people she sees everyday. As the story progresses, we see a more sinister plan in place and a stronger character in Amalia as she decides to fight for what is right was well as a life filled with love.

A heart wrenching and deeply moving story, the author brings to us the trials and tribulations of a mother and her love for her children, her country and herself. We follow her as she navigates through heart ache, desire, and hurt among other emotions. We meet some interesting characters, central to the plot and who add a lot of substance to it. This story teaches us about making choices and the consequences each choice may have.

Trained in lies, a covert agent learns the truth

Veteran CIA officer, Titus Ray–on the run from the Iranian secret police–finds shelter with a group of Iranian Christians in Tehran. While urging Titus to become a believer in Jesus Christ, they manage to smuggle him out of Iran to freedom in Turkey.

Will it help him deal with his past?

Returning to the States, he discovers his Iranian mission failed because of political infighting within the Agency. In a hot-tempered outburst, he delivers a scathing indictment against the Deputy Director of Operations, and, as a result, the deputy forces Titus to take a year’s medical leave in Oklahoma.

How will it change his future?

Before leaving Langley, Virginia, Titus learns he’s been targeted by a Hezbollah assassin hired by the Iranians. Now, while trying to figure out what it means to be a follower of Christ, he must decide if the Iranian couple he meets in Norman, Oklahoma has ties to the man who’s trying to kill him, and if Nikki Saxon, a local detective with an intriguing past, can be trusted with his secrets.

Wow! I truly enjoyed reading this book to the extent that as soon as it was completed, I got the next book in the series and started reading it.

Titus Ray, a veteran CIA officer, is suddenly made aware of the meaning of religion and faith due to various circumstances. This in some ways slowly brings about changes in him. In parallel, he is forced to deal with the bureaucracy of his higher officials, which may have resulted in the failure of his mission. Titus is forced into taking medical leave due to an outburst, resulting in him moving away and facing his thoughts as well as living in a small town.

We are introduced to Nikki Saxon, a local detective, who is serious about her job and determined to see her job through. An encounter between Titus and Nikki leads to something more, something that would make Titus re-consider trusting a person. Titus also turns to faith and meets an Iranian couple at his church. A series of events are set off, bringing him and Nikki together and eventually leading to the abrupt end of his medical leave. All it took was one night, one experience, one mistake to change the course of Titus’ life.

A well- written novel, this is truly enjoyable and will take the reader on a wonderful journey. The characters are well developed and the plot is well thought out. This book ends with a strong lead to the next and will ensure that the reader will want to pick up the next and continue the journey.

I strongly recommend this book and the rest in the series. I will be writing a separate review for the next book in the series quite soon! Until then, please like, comment and share your thoughts if any.

Author A. J. York is back with another book in the Delilah Dusticle series. I was offered a copy of this book in exchange for an honest review.

In this exciting instalment, Delilah Dusticle and the Dustbusters travel to the vibrant and mystical land of India. On arrival, they are tasked with a quest to overcome a powerful curse and save a life. It soon becomes clear that it is Delilah, who must find the strength and the power to defeat the curse. This is the third in a series of stories following Delilah and the Dustbusters on adventures around the world. Get ready to join the fun and experience the magic!

Find the book at:

This is a rather short novella about Delilah’s adventure in India. The story is fast paced and there is not a single moment in which you are likely to feel as though the author is beating around the bush. It is a simple, fun filled adventure where Delilah and the other Dust busters go off to save he world, or more like a girl from the clutches of a powerful and cursed storm. We once again meet all the wonderful characters from the previous books and it feels as though it is a reunion of old friends. The author leaves us with a taste of what is to come in what might be the final book of the series. The author has managed to capture the essence and beauty of India as well as the heat! The descriptions of the transport systems, the train station etc were spot on.

A delightful short story for fans of the series, this is a perfect book for young readers. It is easy to understand and is comparable on some level with the Faraway series and many others by Enid Blyton. I strongly recommend this book and the others in the series for youngsters starting out to read or still too young to pick up a book. It can be read out to them. The perfect bedtime novel.