This is going to be my last book review for year 2020! WOW! It has been a  wonderful year with respect to books and reading for me! 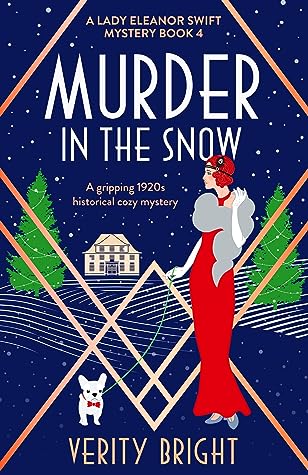 An English Christmas has mince pies, cheerful carols, a twinkling tree… and a murder? Thank goodness Lady Swift is on the scene!

Winter, 1920. Amateur sleuth Lady Eleanor Swift is feeling festive. She is playing host to the entire village at Henley Hall for gifts, games and gingerbread. She’s also purchased perfect presents for each of her household – not forgetting the biggest bone in the butcher’s shop for her partner in crime, Gladstone the bulldog – and is looking forward to celebrating her first English country Christmas.

As snowflakes fall, Eleanor is cheering on contestants in the traditional Christmas fun run in the grounds of the Hall. But tragedy strikes when one of the runners drops dead at the finish line. Dashing Detective Seldon is convinced it’s just a heart attack, but Eleanor isn’t so sure. When she finds a rather distinctive key where the man fell, Eleanor knows she’ll never rest until she finds out the truth about what happened in her own home.

Next the vicar is taken ill with what looks like poison and Eleanor starts to wonder if the two cases are linked. When someone tries to frame her by planting poisoned berries in her own kitchen, she knows speed is of the essence. But the entire village was at Henley Hall for the festivities and Eleanor has enough suspects to stuff a town full of turkeys. Can she nail the true killer and clear her name in time for Christmas?

Christmas won’t be complete without it! A festive treat for fans of Agatha Christie, TE Kinsey and Lee Strauss.

I requested for and was approved a copy of this book on NetGalley thanks to the publisher Bookouture!

Murder in the Snow is the fourth book in the Eleanor Swift mystery series and thankfully can be read as a standalone. The story, set in the winter of 1920, follows Eleanor as she plays host to the entire village, bringing everyone together for Christmas celebrations. What she does not expect is for one of the contestants to collapse and be declared dead from a possible heart-attack. As her investigative instincts kick in, Eleanor starts to figure the whole thing out when her butler agrees that it seems suspicious.

There are minimal references to her adventures and previous mysteries solved, but these do not take away from the story, nor do they create any confusion for the reader! With a lot happening in the book, the reader is in for unexpected surprises as Eleanor proceeds with her investigation, many times in the most unladylike manner for the 1920s. However, this just adds to her endearing character and makes the reader fall in love with her. The other characters in the book are charming and the best is Mr. Clifford! I adore how he handled the house and supported Eleanor in spite of just being her butler. His connection to her late uncle seems to add some intrigue to his character.

The story is very well-written and mixed in with festive cheer. I enjoyed reading about how the people amused themselves in this rather picturesque setting. This murder mystery is definitely worth the read and I look forward to reading more about Eleanor’s adventures!