Long before the times of Draupadi and Sita
Immortalised in the hymns of the Rig Veda
But largely forgotten to the memory of India
Is the Warrior Queen with an iron leg, Vishpala
Brought up in the pristine forest school of Naimisha, Avishi reaches the republic of Ashtagani in search of her destiny. When Khela, the oppressive King of the neighbouring Vrishabhavati begins to overwhelm and invade Ashtagani, Avishi rises to protect her settlement. But peril pursues her everywhere.
Separated from her love, her settlement broken, with a brutal injury needing amputation of her leg, can Avishi overcome Khela?
About the Author: 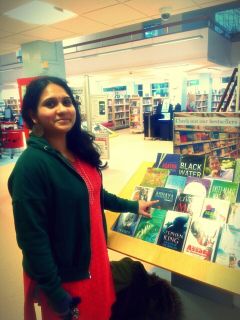 Saiswaroopa is an IITian and a former investment analyst turned author. Her keen interest in ancient Indian history, literature and culture made her take to writing. Her debut novel Abhaya, set in the times of Mahabharata was published in 2015. Avishi, her second novel set in Vedic India explores the legend of India’s first mentioned female warrior queen Vishpala.
She holds a certificate in Puranas from Oxford Centre for Hindu Studies. She is also trained in Carnatic Classical music and has won a state level gold medal from Tirumala Tirupati Devasthanams.
Website * Facebook * Twitter
This Cover Reveal is brought to you by Book Review Tours