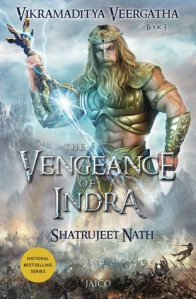 VENGEANCE IS A CAGE. FORGIVENESS IS FREEDOM.

In their greed to possess the deadly Halahala, the devas and the asuras have employed every dirty trick against Vikramaditya and his Council of Nine. But the humans are still standing, bloodied but unbowed.

When the wily Shukracharya discovers the secret to breaking the Council’s unity and strength, he forges an unlikely alliance with his arch-enemy, Indra, to set a deceitful plan in motion.

As cracks emerge between the councilors and their king, ghosts from the past threaten to ruin Vikramaditya and Kalidasa’s friendship, signaling the beginning of an eclipse that will cast a long shadow over all that Vikramaditya holds dear. And into this shadow steps Indra, bearing an old grudge – and a devastating new weapon.

How much longer before the Guardians of the Halahala finally fall apart?

Once again my heartfelt gratitude to the author for reaching out to me regarding this series!

The Vengeance of Indra is Book 3 in the Vikramaditya Veergatha series. It picks off where Book 2 ends and maintains a steady pace throughout. With cracks forming in the bonds between the councilors in the court of Vikramaditya, it feels as though everyone is starting to forge their own path. Having been sent away, Shukracharya formulates a major plan to wreak havoc in the minds of the humans. To achieve this, he proposes an alliance between the devas and asuras.

With everyone’s focus shifting from the true purpose of protecting the Halahala and sticking together, jealousies come to the surface along with anger and pain among other negative emotions. The author has done a wonderful job with the story and the way it has been brought forward! There are so many many many twists that the reader will be left reeling in shock and trying to comprehend the situation. This is how I felt many times while reading the book, but I loved it!

The beauty of the story lies in it’s characters. Vikramaditya’s personality traits are those which we aspire to have in ourselves. With no fault of his own, he is placed in a situation where being true to his duty, leads to mistrust among his people, his family and those closest to him. The author brings out these contrasts in character traits very well while subtly teaching us some very valuable life lessons!

Book 4, here I come! I cannot wait to know what happens in the conclusion to this epic tale!